“The addition of the hotel will accelerate our time line for development of the entire block,” developer Randy Alexander said.

An 84-condominium tower at 333 W. Washington Ave. was planned for the project’s third phase and the hotel could be finished in late 2008 pending city approval, said Alexander.
The revised Capitol West project will require a zoning change, reviews by city committees and neighborhood meetings.

“A lot of issues need to be addressed,” said Brad Murphy, Madison planning division director, who reviewed the hotel plan Thursday. “From our perspective, we think it’s a pretty good proposal and it could fit in quite well with the mix of uses that are currently planned.”

No condominiums had been sold in the planned tower, but Alexander Co. sent a letter last week explaining the hotel decision to 55 buyers of Capitol West condominiums now under construction.
The first phase includes 164 condominiums in a building replacing the former Meriter Hospital building and in smaller buildings along Broom Street.
Hyatt Place is a new hotel brand that features two-room suites, 42-inch plasma televisions, Starbucks coffee and hot breakfasts, said Dennis Meikleham of LodgeWorks, a Wichita, Kan., company under contract with the Alexander Co. to develop the $20 million Madison hotel.
Meikleham said Hyatt is converting all of its AmeriSuites hotels to the Hyatt Place brand as well as seeking new properties.
He said the occupancy rate at Downtown Madison hotels is more than 70 percent, which indicates a strong market for additional rooms. The proposed Madison hotel would have small meeting rooms, but no large meeting space.
Tom Farley of the Greater Madison Convention & Visitors Bureau said the Downtown area can use another hotel.

“The demand is there,” he said. “Anytime you have more rooms Downtown it’s going to be a benefit to the city.”

Alexander said including a hotel in a mixed-use development like Capitol West has been done in other cities but not yet in Madison.
He said the hotel could be used by visitors to owners of nearby condominiums and would fit into the residential community because of the modest number of rooms, no outdoor pool and no late-night bar. Hotel guests would share the Capitol West parking ramp with residents.
Although Downtown condominium sales have slowed along with the rest of the local real estate market, Joe Alexander, also of the Alexander Co., said the current market wasn’t a factor in replacing the condominium tower because completion of that phase wasn’t planned for several years.
As originally proposed, Capitol West was expected to have 400 condominiums, 20,000 square feet of retail space and up to 100,000 square feet of office space to be built in three phases.
Last year, the Alexander Co. modified the project, adding more condominium units by making some units smaller and adding a floor. Facade changes also were made to make the project more energy efficient. 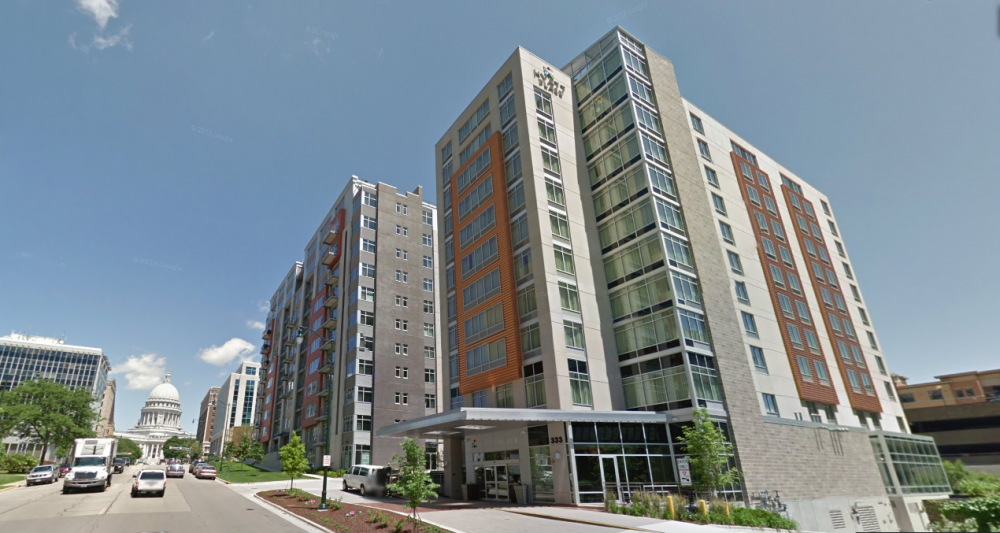