In real estate, the term “Golden Triangle” is associated with the most coveted, upscale property in a given metropolitan area.
In terms of commercial property, the Madison-based Alexander Co. is developing its own Golden Triangle in the Novation Campus development, a triangular property that is attracting a growing number of high-profile tenants.
Meriter Health Services, Zimbrick European, and ITT Technical Institute are among the new tenants that have set up stakes in Madison’s most unique and vibrant redevelopment. The smart-growth community, an example of urban “infill” development that limits sprawl, will continue to attract prominent tenants with its central location, convenience, and amenities. What’s more, Alexander Co. provides an array of development services that remove many of the real estate headaches that businesses face.

“We’ve had a number of highprofile businesses that have relocated here the past two years,” noted Dan Peterson, director of communications for Alexander Co., ticking off a list that also includes Great Wolf Resorts and Great Wisconsin Credit Union. “As we continue to build the campus, we can design around business needs. Tenants have the ability to grow within the campus.”

All Roads Lead to Novation

Novation is a 70-acre, master-planned redevelopment between Rimrock Road, the Beltline, and U.S. Highway 14. The campus, linked to the existing road network and a popular bike path, is the last major undeveloped parcel adjacent to a Beltline interchange at John Nolen and Rimrock Road.
The campus also features a public gathering space on the edge of an existing pond and pedestrian-friendly walkways – enjoyed by both workers and the public alike – and its retail and service businesses provide residents in the surrounding Southdale neighborhood with convenient new amenities.
Novation’s central location is especially appealing in terms of tenant accessibility and visibility. The campus is just minutes away from any side of town, and Novation’s Beltline location ensures that its buildings are noticed by passengers in about 120,000 vehicles each day.
Fifteen years ago, when Alexander Co. completed the Department of Revenue building across the Beltline from Novation, a traffic study was conducted to determine where DOR employees come from. The study revealed that they come from all regions Dane County, and that a central location worked best for all employees.
The ability to attract an employee base from all corners of the county also has a workforce recruitment dimension. Novation’s 19 companies now employ 500 skilled workers, so tenants can “essentially hire out of their back yard,” Peterson said.

“This is the most centralized location, with expedient access for employees, clients, and delivery drivers,” added Nicolas Alexander, director of marketing for Alexander Co. “It’s very easy to get here by car and bus, and the Capital City bike trail runs right by the campus.”

Aaron Perkins, general manager of Zimbrick European’s 60,000-square-foot Novation facility, said a central location was an important consideration for the auto dealership as it split off dealerships from its main Beltline location. Zimbrick European, which adds to Novation’s diverse business environment with its Mercedes Benz, Porsche, and Audi models, also appreciates how close Novation is to all parts of Dane County.

“You can be downtown in just a couple of minutes, and we’ve got people that come to work from all over the place,” Perkins said. “It’s really kind of a clover when people are coming to work or leaving work. They are coming or going in every direction, and I think that’s a real advantage of the location.”

Alexander Co. is a well-respected name in the real estate development business; each of its developments has been meticulously planned and extremely successful.
Thus far, five buildings have been constructed on the Novation Campus, with a seventh (Meriter’s new 100,000- square-foot administrative building) under construction. The company’s brand is becoming more evident throughout the campus, but it’s more than a symbol; it represents a commitment to excellence in all phases of real estate.
In developing the Novation Campus, Alexander Co. offers Class A office space, multi-use “flex” space, light industrial, and stand-alone retail options. Tenants have the option of having Alexander Co. design, build, and manage their projects, or mix and match the services of Alexander and its partners with other contractors.
Alexander’s partners include the civil engineering services of JSD Professional Services, the planning of JJR, the geotechnical expertise of CGC, Inc., the traffic and transportation planning of Strand Associates, and the storm water management knowledge of Schreiber Anderson & Associates.
Meriter Hospital is relying on Alexander’s space-design services for its new office, which will house its information systems, finance, planning, and marketing departments. With an expected movein time of late 2009, Fred McGee, vice president of planning for Meriter, said the new office will make possible a series of “domino moves,” allowing for the growth of healthcare services at its Park Street campus.
McGee said hospital management evaluated several sites and choose Novation for the opportunity to build office space to suit Meriter’s needs, for new data center space, for a central location to minimize employee commutes, and for favorable financial terms.
In other words, Alexander Co. offered the whole package. “It all came down to the quality elements between the financial proposal, the location and good proximity to Meriter Hospital, the opportunity to be a part of this development from the ground up, and having the design-build for our own space needs,” McGee said.
Perhaps the best part about working with Alexander is its flexibility, especially the ability to reconfigure space as a business grows. That might be the case for ITT Technical Institute, which now occupies about half of the 37,000 square feet available in its new building. The institute, now in its first year of operation in Madison, has an enrollment of 95 students and expects that to grow from 400 to 600 in four to five years.
ITT is competing with the University of Wisconsin-Madison and other colleges for students interested in popular courses like computer and electronics engineering, web development, and software applications, so it helps to have an accommodating business partner like Alexander Co.

Bill Vinson, college director for ITT, is not surprised that so many high-profile companies are choosing Novation. “Just working with Alexander and the way they do things for us, I’m not surprised at all,” Vinson said. “Alexander is an excellent company to work with.”

The Greening of Real Estate

With more than one million square feet expected at its completion, the $120 million Novation project will be the biggest commercial development Alexander has done in Madison. However, that does not mean environmental concerns have been neglected.
In fact, companies that locate at Novation will contribute to important environmental trends. Alexander uses green building materials and techniques, it has incorporated the most energy efficient lighting and building systems, and it advances the practice of infill.
Such urban infill is a point of pride for Alexander, and it’s an example of how the company is contributing to the green movement and differentiating itself from competitors. At Novation, the cleanup and reuse of a former brownfield site prevented urban sprawl and helped preserve farmland. 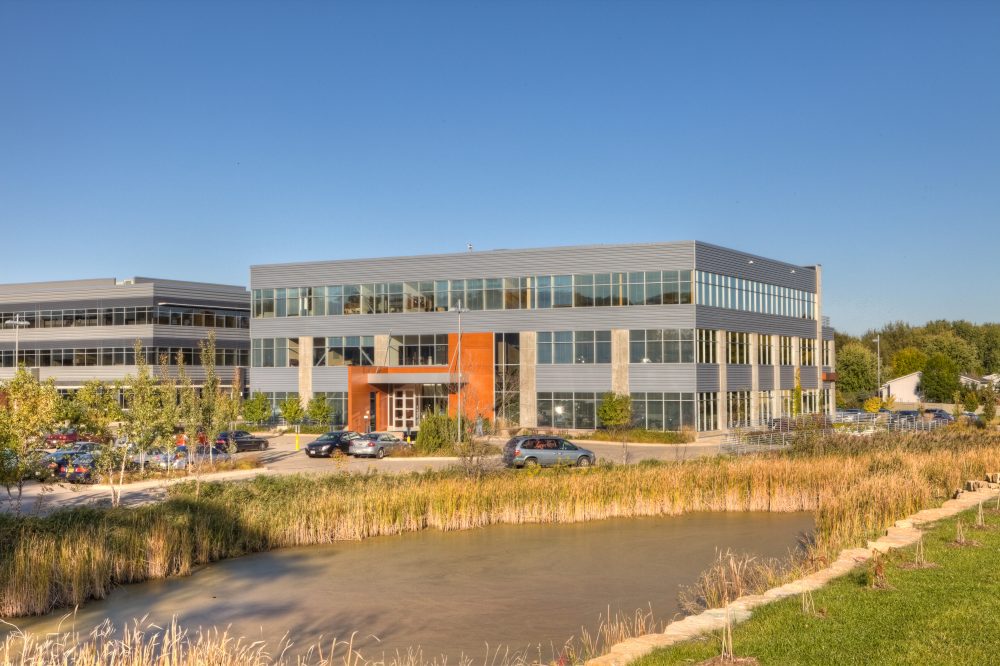